The Cot Death Cover up?

From the back cover: 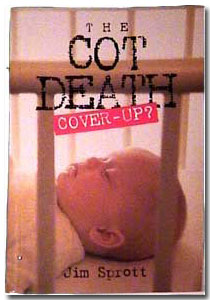 Cot death is the number-one killer of New Zealand babies, but medical science doesn't seem to know why. By the end of this year [1996] over 100 babies may have died, leaving grief-stricken parents and families to mourn their loss forever. Prevention of these tragic deaths seems to elude orthodox medical researchers. Although the face-up sleeping campaign has reduced the number of cot deaths, too many are still occurring. Jim Sprott believes he knows what causes cot death; he believes the public has a right to know, too. In Britain this theory is the subject of a government inquiry- in New Zealand it is largely ignored. Is there some sort of cover-up, and if so, why? In this provocative and important book, Jim Sprott, consulting chemist and forensic scientist, explains the theory and gives simple advice to prevent cot death.
Famous for the forensic research that led to the freeing of Arthur Allan Thomas, Jim Sprott has had a lifetime full of scientific and professional achievement. This book is the result of a campaign by three men: two scientists and a businessman. Jim Sprott tells the story of their research and campaign.

Purchase The Cot Death Cover-Up?
(Chapter One Below)

Summer 1988. In the leafy suburban precinct of Lainston Close near the ancient cathedral city of Winchester, a family wedding was being celebrated. The bride was the daughter of unassuming British consulting scientist Barry Richardson and his wife Janet. On the lawn was a large marquee where speeches were made, toasts were drunk and merriment prevailed.
The Richardsons had hired the marquee from Mitchell Marquees. Peter Mitchell, proprietor of the marquee company, is an ebullient entrepreneur living in Winchester, where he has various business interests. In his early days- doing a reverse Grand Tour- he visited New Zealand and for a while worked on the construction of the Auckland Harbour Bridge. Now in his sixties, he specialises in the manufacture and hiring out of marquees and other outdoor amenities. He's good at it. So good, in fact, that he has even supplied equipment for the Wimbledon Tennis Tournament and the Farnborough Air Display.
It has always seemed to me that Peter Mitchell was an unlikely person to stumble upon the cause of cot death, but that is what he did. And it all came about unexpectedly.
Soon after the wedding Barry and Peter, both members of the Rotary Club in Winchester, were sitting together at lunch. When Peter learned that Barry was a consulting scientist specialising in preventing the degradation of materials, he was immediately interested. He had a problem with his marquees and awnings. They were made of heavy PVC (polyvinyl chloride) plastic, and deterioration was occurring: after a short period a fungal growth appeared, causing unsightly staining. Peter asked Barry to investigate the problem and tell him how to overcome it.
Barry's reply was that no investigation was needed: the staining was caused by a common fungus which became established in the plastic, consuming the plasticiser in the PVC as a food source.
(PVC is a rigid plastic, hard and brittle, and not widely used in this form. The familiar flexible sheeting is rendered pliable by the introduction of plasticisers, of which there are several types. The most common types used in ordinary PVC sheeting are called 'external plasticisers'. These are low volatility organic solvents which are mutually soluble in the PVC. As more of the plasticiser is blended with the original PVC, the sheeting becomes more tough and flexible).
Peter took Barry's answer back to his PVC supplier, who told him the problem could be overcome by increasing the amount of biocide in the PVC, thus killing the fungus. A biocide is a material which prevents the growth of micro-organisms. Biocides used in PVC are frequently based upon the toxic element arsenic and are added to plastics intended for use in the tropics. The actual compound which the PVC supplier was using was OBPA (oxybisphenoxyarsine).
The supplier's suggestion was vetoed by Barry, who explained: 'The biocide won't kill this fungus- instead, the fungus will consume the biocide as well as the plasticiser. Since the biocide contains arsenic, the fungus will generate a very poisonous gas which would be harmful to your staff working with the marquees.'
The PVC supplier listened politely to Barry's warning but didn't accept it.
Not knowing who to believe- Barry or his PVC supplier- Peter contacted the OBPA manufacturer in Austria, whose reply was even stronger: Barry was talking nonsense and OBPA was perfectly safe. And then came the crucial remark: 'It's even approved for use in babies' mattresses.'
Peter pondered on this reply and at about midnight that night woke suddenly with the thought: if Barry is right and the supplier is wrong, could this be the cause of cot death? As soon as it was dawn, he phoned Barry. 'Yes, it could be,' said Barry, 'and I'll even name the fungus for you: it's probably Scopulariopsis brevicaulis.'
On this note started the research programme which finally elucidated the answer to cot death, a problem which had confounded medical researchers worldwide, consumed millions of research dollars, and caused the deaths of so many infant children. The research destroyed the conventional wisdom that cot death has many causes, gave the answer to every known factor about cot death which epidemiologists had discovered, and also provided a cheap and immediate means of eliminating it.

Purchase the book to read further.
Posted by Evie at 2:00 AM