This article is from 2012, but leaves more questions unanswered than answered.

Right now I'll only pick on this one portion:

"Michigan researchers reviewed 140 cases of sleep-related infant deaths in 2010..."
...Registry information from Michigan also showed that mothers in 70 percent of  cases were on Medicaid."

This is a very important observation. Unfortunately, the observation was made decades ago by Dr. TJ Sprott, but the mainstream media is choosing to ignore the truth. 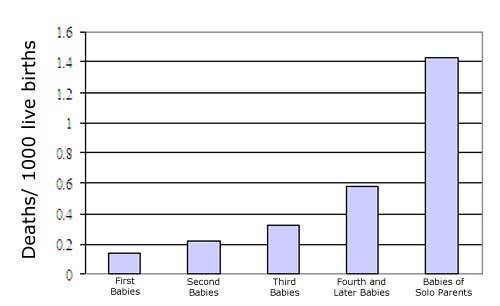 The data in this graph repeats year after year, and is typical of data from other countries where crib death occurs. The graph destroys all propositions for the cause of crib death relating to babies themselves (genes, illness, vaccination, smoking, physiological deficiencies, etc). It forms part of the extensive proof that poisoning by extremely toxic nerve gases is the single cause of crib death. It fully explains and is completely compatible with, the toxic gas explanation for crib death.
If a mattress (or other bedding) contains any compounds of phosphorus, arsenic or antimony, and if certain household fungi grow in the mattress (or bedding), the gas/es which cause crib death can be generated. And if fungi have become established in the mattress during previous use by another baby, the generation of toxic gas commences sooner and in greater volume when the mattress is re-used.
This science accounts for the rising rate of crib death from one sibling to the next. It also accounts for the very high crib death rate among babies of solo parents, who – for economic reasons – are more likely to sleep their babies on previously used mattresses.

My question now...did they ask how old the mattresses were or how many other babies had slept on the mattresses before the baby who died slept on it? And if not, why aren't they asking these questions? It's like they really don't want to know the truth!

70% of the babies who died had mothers on Medicaid, which means they had a very limited income. More than likely (but who knows?!) ALL of these babies slept on a previously used mattress. But instead of investigating this, they print out pamphlets to make sure the "ignorant poor people" know to put their babies on their backs! Yes, let's blame the parents once again...let's continue to look elsewhere...ignore the mattress...